My partner and I were attempting to become pregnant. For many reasons – including my sanity – we have put that on the back burner for now and are just working on walking down the road less traveled. We've been through Katrina – moved to Colorado – and our next adventure is headed to California.

After I bought the sperm.

Now I’m out $500 and I think I’m completely broken – I thought that I was before, but I wasn’t.  Now that I know this feeling, I know what broken is.

All of a sudden today I have a massive amount of anxiety that I can’t seem to get under control…I feel like this option is simply too easy and that something terrible is going to go wrong and derail the entire thing.

Ugh – wish I could shut my head up!

Our chart is not perfect for this month, but I’m hoping that everything goes well for next month and we are a one hit wonder for this pregnancy to happen.  But I can’t shake this feeling that the world is about to crash around me… 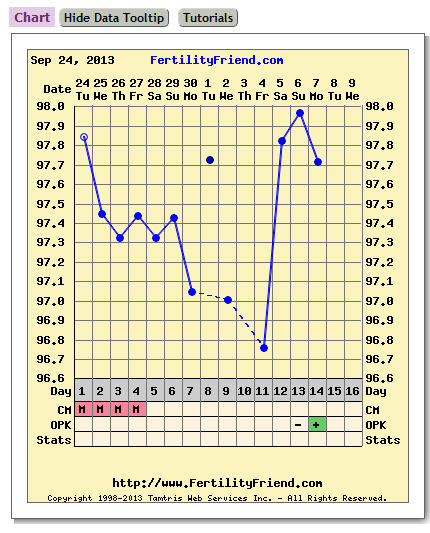 The time she takes it is a bit inconsistent anyway – it gets taken between 7-9am every day, depending on when she has to work.  SOOOO – Do you think that time frame is making it off?  Would you go by the + OPK today or by the crosshairs that have come and now gone?

UGH!  This is so frustrating!  I really don’t want to wait another month and track it, but I also don’t want to waste $500+ and do it the wrong day.  What do you think is more likely an ovulation marker, BBT or the OPK?

Though we will not be inseminating this month, we are tracking her period and today is CD 7.  So far a pretty little FF chart for me to follow so I can start my usual obsession.

We had a sit down conversation with our family on Friday Afternoon and it went fairly well.  Most of the family showed up – which was awesome! It was really nice to have everyone in the same room for the first time in a while.  The only person who didn’t make it who was supposed to be there was J’s mom.  (J is the cousin that will be the surrogate for us).  J’s mom called about 6 pm to say she couldn’t make it because she had some medication she had to take at 8PM on the dot and it was just not something she was going to be able to do. I let her know it was up to her but it would probably be something she would want to attend.  We ended with me telling her we’d call her when we talked to the family.

Being honest, she’s the only person I’m worried about.   The first thing she did when we told everyone was bring up how hard it was going to be for J to be able to carry a child for 9 months and then “give it away”.  She definitely made it a bit about herself and said that she had thought about doing it for 2 years in the past for her sister but just couldn’t see herself giving the child up.  She then wanted to know if she was going to be grandma (or MiMi as her grandchildren call her).  We let her know that no, she would be Aunt B – and she then asked if she could be Aunt MiMi.  I think it’s going to take her some time to realize that she is not a grandmother to this child – this child is being created for and by Shayne and I, J is simply babysitting for a while (J’s words, BTW – just love it!).  I don’t want my mother’s moment as a Grandma (MawMaw as we call them down in the south) to be stepped on by J’s Mom.  The fastest way to get me to become a crazy person is to hurt my mom.  Of course it’s still really early in the process and It will all shake out as the months go by.  I’m certain at some point there will be a come to Jesus meeting again.

So anyway – the plan so far is to track this month and inseminate next – which would put the insemination happening around the 5th of November (and Shayne and I heading on a cruise on the 11th will help with me driving J crazy during the 2ww).

So – here’s to a crazy next 2 months and hopefully a 1 hit wonder pregnancy and perfect timing for a baby next August!

It’s been 9 months since I posted last.  Interesting number, right?

I haven’t posted the exact amount of time it would take for me to have a baby.

For the record, I still don’t have one.  I do, however, have some interesting information…but I’ll get to that.

The last 9 months in bullets –

As for me?  Well, I still sometimes end up in the fetal position on the floor of my office on random days because the pain of it all is just too much to bear.  I still find myself falling into tears when commercials come on TV or when all the cute little summer clothes in the Dollar General store are on sale.  I still ache for a sweet small baby to be cuddled up against my chest and the smell of her hair as I rock her to sleep – but I no longer found myself able to see the light and find the ability to believe that it would ever happen for me.  I tried – I tried so hard to walk away from it all.  I tried to just accept the fact that it was not “meant to be”.  I winced when people said that it would happen when the time was right because I felt like that meant I had done something to keep the time from being right for me.  Something I did or didn’t do kept me from becoming pregnant, stopped the IVF coverage, broke my heart every time an adoption counselor basically told me that they were rejecting me.

But a family member of mine told me yesterday that she has been thinking about us for a while and she wants to surrogate for us.  I called a lawyer today and spoke with a few people and it seems as though it’s legally not going to be a huge deal since surrogacy is technically against public policy in LA (though not illegal) and therefore a surrogacy contract is really not required since they are unenforceable anyway.  I can’t afford to do IVF, so it would be the family member’s eggs.  Since she is a close family member, it would be an inter-familial  adoption (which is easier through the court system).

So our next few weeks is going to be talking about a lot of things, figuring out living situations, and deciding exactly how to go through this process.  Of course nothing is ever a for sure situation, but it feels much closer than it has been in a while.